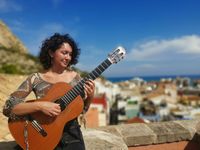 https://youtu.be/Y3WHM_YKw04 Throughout history, women have often been overlooked and the Western classical tradition is no exception. Often, there is a pause when one is asked to name more than one female composer – even, indeed, by music scholars and professionals. Up until the twentieth century, it was considered immoral for a woman to be making music in public – whether that be performing or composing – and women were confined to domestic music-making. Along with many other factors, such as lack of education, opportunity and autonomy, this is one reason why there is a data gap of female composers in the histories across the Western Classical Tradition, and guitar repertoire is not exempt from this issue. The loss of knowledge and music that the silencing of women composers will have caused is sad and frustrating, but in this lecture/survey I aim to rediscover and highlight the major women composers for guitar and their works across eras and genres.